It has been quite mixed weather in the Lake District for the past few days; the forecasted “heatwave” seems to have bypassed us completely, leaving only drizzle and short sunny spells. With the best forecast for Thursday we decided to head to the fairly reliable Gimmer crag in Langdale with its multiple faces and exposure to the wind meaning that you can normally find a dry line when other crags are damp and seeping.

Four of us headed up to the crag, Nick and I forming one pair and two lads from Devon, Tim and Will. We decided to walk in via Raven crag scrambling up Middlefell buttress and the curtain wall before traversing in to Gimmer, both routes were a little damp but still enjoyable, Raven crag as a whole looked damp with only the easier lines looking good enough to climb.

After reaching the base of Gimmer we went to check out The Crack on the North West face, this was wet along with most other routes on the face, we dropped back down and decided to climb the North West Arête while Tim and Will did Intern to gain the ash tree ledge. Our plan was to climb F route but unfortunately a large amount of moss has grown over the route which was holding on to the water and didn’t look too inviting to climb, the corner was fairly clean but the face out right was covered! Just avoiding the moss and damp were the E1 and E2 lines of Whit’s End Direct and Spring Bank respectively. Nick decided to Tackle the E1 while Tim lead the E2. The E1 felt tough even to second but had just enough in the way of holds to keep you on the face, the crux being a small overhang with committing moves on tiny footholds, the exposure keeping you gripped from start to finish! Tim made a fine ascent of the E2 line with the crux also at an overhang, after spending a few minutes composing himself he made the committing, but well protected moves over the overlap, a few tense moments followed until he found some comforting holds and gear, an impressive lead.

We abseiled down to the base of the crag passing over D route which was dry. By now the day was drawing on so we decided to finish up the classic Bracket and Slab climb via the direct start. As is always the case when you do a quick route to finish the day you get lost and end up somewhere high on the crag wondering what had happened! Upon looking at the guide it appears we strayed on to B route joining it at the Amen corner which was no bad thing as it was dry and provided some enjoyable climbing to end a fantastic day out in the mountains, we arrived back at the ODG at about 7:30pm sunburned and completely worn out but happy to have had a day out climbing when it seemed we would struggle to find dry rock. 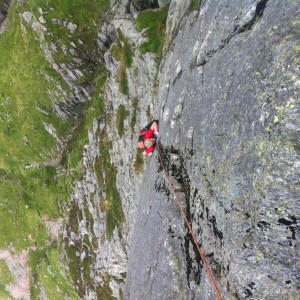